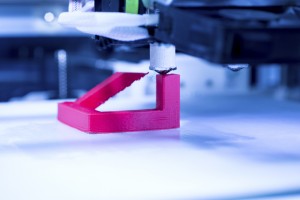 3D printers are on point to take over the manufacturing world. These awesome machines are capable of printing toys, cell phone cases, prosthetic limbs and even an entire house made of bricks.

Everything from cars to full-size mansions have been successfully built using 3D printers, and now something new has come on the scene, a type of 3D printed brick capable of cooling your house. The 3D printed brick, known as the “Cool Brick” allows for faster production, less wear and tear on the environment, and it could also save you money on your electric bill each month.

Before understanding how the 3D printed brick keeps your home cool it’s important to explain an old school form of air conditioning used to cool very hot regions without central AC. The low-tech premise behind the Muscatese Evaporative System involves covering windows with a wooden lattice and placing a water-filled ceramic jar inside, behind the lattice. As air moves through the lattice, the water in the jar naturally evaporates and provides a cool stream of air that flows through a home.

Sure, this method might not be as efficient as your central air conditioning, but this old school style of AC is important in order to understand the technology behind the latest 3D printed bricks. Oakland-based 3D printer company Emerging Objects has taped into the engineering behind the Muscatese Evaporative System in a very modern way.

Emerging Objects has created the Cool Brick, a 3D ceramic brick capable of shielding a building from the outside world and working like an AC system sans electricity. The printed brick combines the qualities of the wooden lattice and ceramic water-filled jar into one Cool Brick.

The porous materials used to print the bricks act like a sponge and soak up water. When the wind blows this water is transformed into a cooling vapor that flows throughout the home.

Emerging Objects is responsible for a number of awesome 3D printed inventions, including printable cement polymers, rubber composites, wood, and now ceramic bricks. Ronald Rael, the co-founder of the company, has great interest in traditional architectural building as well as earth-built structures such as mountains and caves. He finds it interesting and rather telling that earth-built structures outlive modern architecture every day.

As a professor at the University of California Berkeley, Rael has years of research under his belt regarding modern architecture and earth-built structures. He says, “Traditional earthen structures are really 3-D printed. They’re additively manufactured, mud clump by mud clump, mud brick by mud brick.”

Cool Bricks could reduce a great deal of waste, as they require no molds or framework. The bricks are printed out so that they easily fit together just like the pieces of a puzzle, and are bound by mortar like traditional masonry work.

Cool Bricks are pretty cool for everyone, especially if you live in an extremely hot or humid environment. Instead of running an environmentally damaging air conditioning unit, you could simply water the outside of your home. As a result, the bricks would naturally go to work cooling down the inside temperature thanks to airflow.

3D printing is expected to change a lot of things for the better in the coming years. 3D printers put less strain on our fragile environment, allow for more affordable production, and considerably speed up the construction process.

3D printers really work; plenty of full-scale production projects stand in proof.
In China, construction workers used a 3D printer to quickly construct 10 houses in only one day. The homes are plain, simple and only impressive because they are a real, safe home you can live in built by a 3D printer. The homes were built using concrete and recycled waste materials, all of which were formed together and printed out piece by piece.

China is also home to the world’s largest five-story building and the world’s largest mansion built by printing layer-by-layer using a 3D printer. The 3D printed mansion measures an incredible 11,840 square feet and cost developers only $161,000 to build thanks to the advanced technology offered by 3D printers.

It’s not just homes. A start-up car company, Local Motors, was able to print a two-seater model car they call the Strati in less than 48-hours using a 3D printer.

3D printers are also advancing the medical community. It is now possible to print functioning arms and legs for amputees for a mere fraction of the cost.
It is undeniable that the future of cars, homes and other big-ticket items will change in the coming years thanks to 3D printer technology. As a result, everyone will save a considerable amount of money and the strain on our planet will be reduced.

Would you consider building a house using 3D printed bricks?