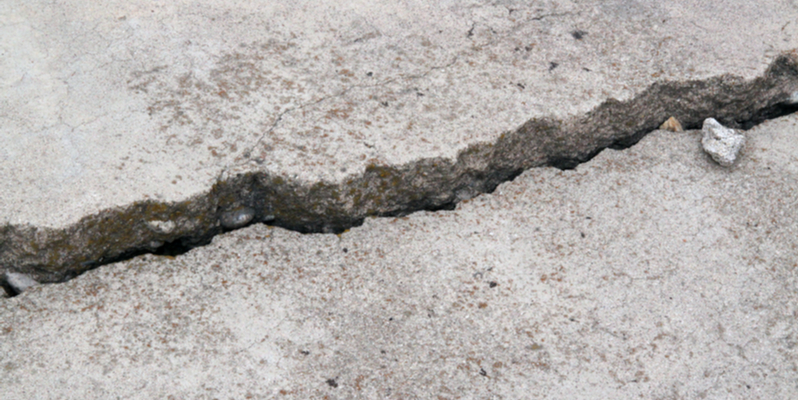 Plastic shrinkage is one of the most common reasons for early cracks to form in concrete. Concrete remains in a plastic state before it fully hardens, at which point it is full of water. Moisture takes up space and makes the concrete a certain size. The natural curing process causes moisture loss, which in turn causes the concrete to decrease in size. This puts stress on the concrete slab and drags it across its granular subbase. Without free movement, this creates a good deal of stress, which can cause the slab to crack to relieve pressure. Shrinkage cracks are especially prominent in hot weather and may occur as soon as a few hours after the slab is poured and finished.

Many times, plastic shrinkage cracks are no bigger than a hairline crack and are hardly visible to the naked eye. Still, it may extend the entire thickness of the slab, which means it is deeper than the surface.

Factors that contribute to plastic shrinkage cracks include mixing the concrete with too much water. If more water is present in the mixture, it will have further to shrink as the water evaporates during the curing process. It is common to use wetter concrete simply because it is easier to place and finish, especially in hot weather. While it makes work easier for concrete mixer trucks, it’s not a good idea. While a few liters per cubic meter shouldn’t make any drastic difference, anything more can impact the mix, reducing the concrete’s overall strength and longevity.

Where are Shrinkage Cracks Commonly Found?

While plastic shrinkage cracks can be found on any part of a slab or wall, they are most common at re-entrant corners. These are corners that point into a slab. For instance, if you pour concrete around a square column, there would be four re-entrant corners where shrinkage cracks are at a heightened risk of occurring. This is because the concrete cannot shrink around a corner, thus putting stress on the concrete and leading to cracks.

Control joints are commonly used to fight back against random shrinkage cracks. By adding control joints to the slab, it allows concrete to increase and decrease in mass, giving more flexibility to each slab. Grooves are placed throughout concrete to create a weak spot in the slab that will crack instead of the concrete when the concrete shrinks.

Joints should be placed soon after concrete is poured to increase the chance of preventing plastic shrinkage cracks.

It is important to add crack control joints at all re-entrant corners and slab penetrations, places where cracks are more likely to form. They must be evenly spaced throughout the entire slab to provide the proper cushion and flexibility. For 100mm thick residential concrete, the slabs should be separated into equal square sections with no joint reaching more than 3 meters from the closest parallel joint. According to these guidelines, a 1.2-meter-wide footpath would be cross-jointed at 1.2m interludes.

When dealing with a driveway that measures less than a meter wide, it is usually considered safe to omit the center joint that moves up the length of the driveway and just rely on evenly spaced cross joints that move up the driveway width. If joints are not properly placed, the concrete will crack, essentially forming its own joints.

Well-poured Concrete Makes All the Difference

Well-mixed and poured concrete with properly spaced control joints makes for long lasting surfaces that are less likely to suffer from plastic shrinkage cracks. The experts at Turnbull Masonry install top-notch concrete surfaces you can count on in Toronto. Contact us today to learn more or to get a quote.