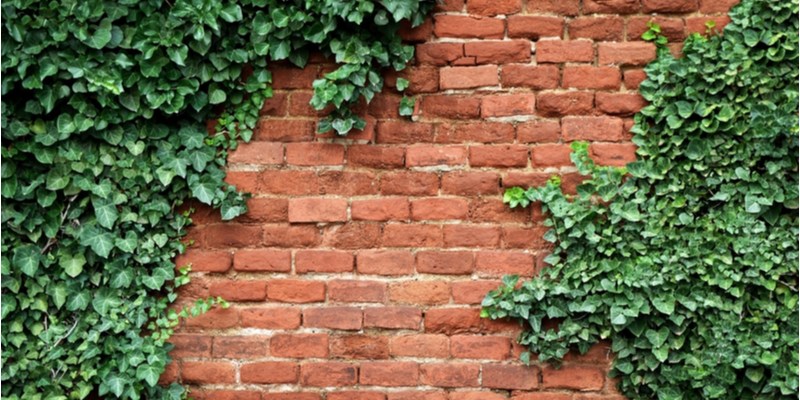 Generally speaking, it’s not problematic in itself for brick to be covered in ivy, although there are more issues with old brick covered in ivy due to its more sensitive nature. While it looks beautiful, and many buildings have been covered in ivy for over one-hundred years, there are some things to consider and watch out for if your brick home or structure is adorned in vines.

Well-built masonry is usually not damaged by climbing vines alone, although there are potential problems if you are talking about masonry constructed prior to 1930. At this time in history, mortar did not contain Portland cement, and this makes it more likely to erode over time. By adding ivy or vines over historic masonry, you may not notice that the structure is eroding, which will prevent you from fixing it before damages get out of hand.

Damages Can Hide Out Beneath the Ivy

The same is true for most brick, it’s just a more pressing issue for older masonry. Checking brick on a regular basis helps prevent issues from ballooning out of control. For instance, soft or crumbling mortar can be fixed by repointing mortar joints. Yet, if damaged mortar goes unnoticed because beautiful vines or ivy cover the damages, it will put excess strain on surrounding bricks while allowing access moisture to seep beneath the surface, further adding to damages. Over time, bricks will start to spall or fall out of the wall. This is far costlier to fix than repointing mortar joints.

Aggressive Vines Can Weave Their Way into Cracks

Vines that tend to be more aggressive, such as English ivy, can break into cracks as well as weak points in brick and mortar. If you go to pull away the ivy, it might take down entire bricks, or sections of brick, with it – and that’s never a good thing. Some buildings have been covered in ivy for so long one must wonder if it’s the ivy or the mortar holding the structure up!

Luckily, ivy isn’t usually strong enough to create cracks on its own. That’s why solid and well-constructed masonry can handle ivy and other vines.

The Dos and Don’ts of Growing Ivy on Brick

If you love the look of ivy growing on brick, adhere to the following suggestions:

Tips for Growing Ivy on Brick